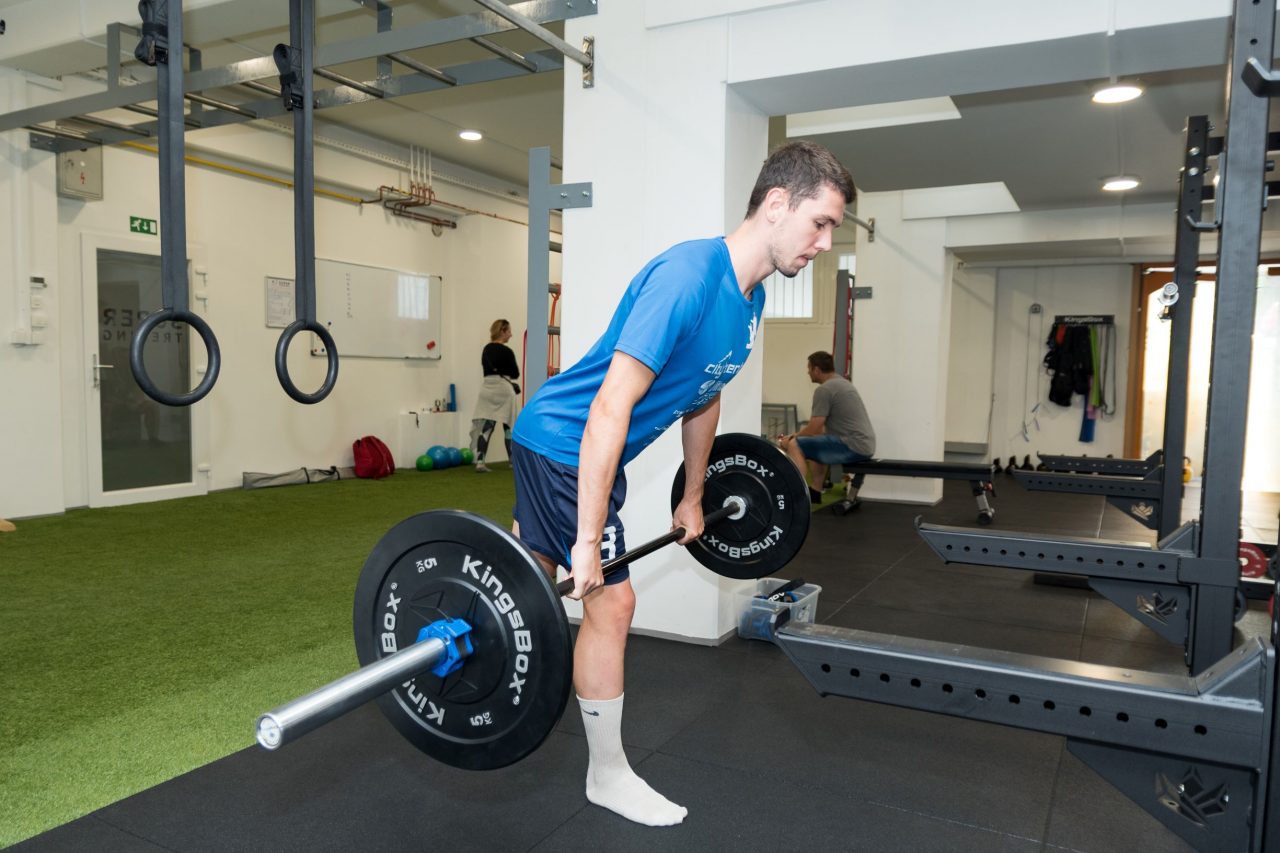 Citius, Altius, Fortius is an Olympic motto that mean faster, higher, stronger. There is hidden meaning of why and how to train. We should strive for getting stronger, faster and jump higher to get better.

There is no fourth Latin word lenis. That’s the word for softer or in the case of this article unstable.

These days there are many bogus ways in how to train. One reason is coach’s current knowledge and the other (not the last) is globalization. Read it, easier way to get to the information, using WWW. With just one click away from information required to assemble a new workout that is different from the last one. One such way is looking on YouTube to get some ideas how to train. Believe it or not this is not so uncommon and probably many “coaches” use it in real life.

One such way using “one-click-ideas-for-workout” is by using a rubber half ball not enough inflated to stand on it and performing squats. We are going to name this kind of training unstable surface training or UST in short.

From athletic standpoint I looked at some papers and books along with what science says about the use and benefit of the UST. I also sacrificed myself in the name of science and did some squats for the sake of getting some answers and numbers for comparison.

I have done regular SQUATS (see I wrote that with capital letter, because of the respect and recognition for the SQ, after all SQ is the king of exercises) on hard surface just like they have to be performed and squats standing on unstable surface (US) for which I used Bosu which is a half rubber ball semi inflated with hard flat base on one side on which I was standing.

I have used the same loading for comparison between them and did exercises in same protocol: ROM, thigh angles, maximal effort in every repetition. First I done regular SQ and rest for three minutes and repeated that standing on US.

Now before you start firing your remarks how useful this second option is, hold on I will touch on that later.

After performing I got the numbers from the computer using LPT and compare them next to each other in table below.

I did Squats on hard surface (wooden box) and on soft surface. After warm up I then connected LPT from Chronojump to the barbell and computer. For the sake of doing everything almost the same I stepped on wooden box and BOSU staying on hard side of it for the sake of height, loading the barbell with 60 kg which is 35% of my current 1RM load.

You may ask why I did just SQs with 35% of 1RM load. Question in place I may add. Because of safety reasons! When stepping on and off the unstable surface there is so much wobbling that with heavier weights this might be hazardous for an athletes and for me of course. You don’t want me to get injured, or am I missing something?

Squats were done in almost the same manner except the standing platform. Range of motion was 40 cm. I squatted until my knees were at 90° and that my upper thighs were 60° from vertical.

Firstly I did five Squats on hard surface (HS SQ) performing them with max effort, then rested for three minutes and repeated the same only now standing and squatting on US (SS SQ).

Bellow are some numbers from two of the best reps for representative SQ — HS & SS.

Aftermath of doing it…

It is quite obvious if you look at the table fast that all the numbers that represent HS SQ are better than those for SS SQ. I have looked into other repetitions and the results are the same. We can see that the ROM is the same of 40 cm vs 40,6 cm, that’s quite the same considering I didn’t have any mechanical or physical barrier for stopping me. Average velocity for HS best rep was 1,011 m/s and for SS was 0,782 m/s which is quite big difference of 22,7%. The difference for maximal velocity is a little bit closer “only” 12% apart. As the maximal velocity is always just before the end of rep we can conclude, that the main difference must be at the start of the rep. Where it is the most important. We can see that acceleration is 32,1% bigger in HS vs SS SQ. Below we can see the difference in rate of force development (RFD) which is quite important metric in sports.

As we can see from above tables that in every cells from HS SQ there is bigger value then in SS SQ cells. Average RFD or Index of explosive strength (IES) as Zatsiorsky names it, there is a 25% difference. To put this into some context, imagine that a sprinter who sprints 100m in 10 seconds and their ground contact time (GCT) is around 80 ms is having some issues and he is constantly with every step of 42 steps on 100m having 25% longer GCT that would produce a 0,9 second slower finishing time, meaning 10,91 seconds! Not considering other important factors. Stride length, acceleration…

In every part of 10 ms section the HS SQ RFD is bigger than those in SS SQ from 48% in first 10 ms from zero, 22% in second section and finally to 47% in last section that can be compared between them.

There is 41,5% difference in average power production within the repetition and almost 30% difference in average force production, of course in favour of HS SQ. This is confirmed in Cressey’s book: The Truth about unstable surface training, where he mentions a paper from Behm et al. In which they measured and compared knee extensors and plantar flexors muscles force production during execution of leg extensions while sitting on chair — stable exercise and while sitting on on stability ball — unstable exercise . Stable knee extensors test showed huge 70,5% difference from stable vs unstable and in plantar flexion test it was lesser difference of only 20,2% between stable vs unstable test.

So what is the point of all this? According to Zatsiorsky we should strive for quicker developing of force in time-deficit zone as this is normal in sports. The athlete’s don’t have luxury of having enough time to develop maximal force. This is called Rate of force development. Comparing two athletes that are similar in many abilities, the more successful has shorter time till maximal force and bigger force which leads to better sport performance.

Knowing this, why the hell do coaches still use unstable-exercises like those standing on Bosu? Ignorance and/or stupidity maybea big issue here? Some of them would try to reasoning their decisions with influencing the possibility to lessen the injuries. Sorry there is no such thing yet. For now the smart people have not found the saviour pill for minimizing injuries. Okay, while doing exercises on unstable surfaces we activate more muscles to work, besides agonist and antagonists there is more activating of stabilizing muscles, but this is not the solution here as this means that metabolically we overwork too many muscles and we tire sooner. We saw above in table that SQ on US is longer in duration, 14% in my case which by the way were shallow in comparison to my regular SQs. If it would be performed fully this difference would be bigger. Just image fighting or running all tense up. How long would you last?

Instead exercising on US there is much better solution performing unilateral exercises but on hard surface as this too activate many stabilizing muscles probably (I am sure of this, but lacking proof) in faster and bigger rate. This kind of difference is something Dr. Stu McGill researched in his lab during unilateral and bilateral squats. Both McGill and Robertson came to same conclusion. Robertson wrote in his book: The single leg solution: “The more stability equals more prime mover action and les stability equals more stabilizer activity.” In conclusion he writes that: “it’s hard to maximize loading and strength when you’re simultaneously challenging balance and stability.

So more effort, stress, harder to do exercises, does not lead to performance improvement. Now that I wrote down a few reasonings for a better planning there is no need any more to include this circus like exercise in our training. Of course you can still use this exercises on US, but now you have knowledge which to make better reasoning from and why! I can still do from time to time exercises on US to “play” during warming up and in rehabilitation and that’s about it.

As this article concentrates on athletic training for sports performance I do not want to go any deeper in rehabilitation side of US training where there this kind of work have long period of successful use.

Training on US combines two major factors stability and balance. Considering just balance there is numerous neural mechanisms that interact between them to maintain it. For instance holding balance we must get some sensory inputs back from outer world (visual) and from within the body (proprioceptive). Proprioception is a big thing in rehabilitation but totally different thing in athletic training. Okay we have to do some, but this must not to be overdone on expense of other abilities.

There is a trend that wants us to believe that training on US can lessen the injuries. Cressey in his master thesis wrote that there is little data to support this claim. But as far as we are concerned with sports performance training and outcome from it I would always take a bet on training for improvement strength then on balance training to minimize injuries.

According to some there is bigger value in performing UST for upper then lower body, but that is another story.

Can there be any crossover effect to real life application of doing UST? The conclusion is this; there are not that many studies yet on this subject. Maybe because it is worthless (IMO)? Yes I am bad! You could say that playing sports can and does be on unstable or soft surface. Ok in beach volley that is true but not in skiing where I see very often these kind of exercises performed.

Remember last year’s downhill course in Kitzbuhel? It was more like a concrete road, not even close to unstable or soft. Just look at the picture below. Do not mistake soft unstable surface with slippery hard surface where the material (ski edge) is doing the job similar to ice skates do on ice. Also it is not the same thing, trying to maintain your balance on a soft, unstable surface in training and falling off balance onto a hard surface in real life.

And this leads into the second part of this real-life story where I will look deeper in what the real science has to say.